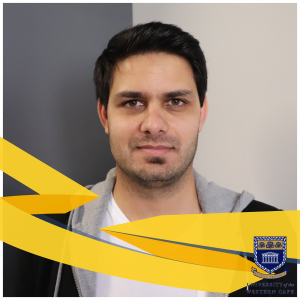 Dr. Mehrdad Ghaziasgar is a Senior Lecturer in Computer Science at the University of the Western Cape (UWC). He received his PhD in Computer Science with a specialization focus on computer vision and machine learning for human gesture recognition from UWC in 2017. The PhD work commenced, and was successfully completed, in one year (2016). He has been (and continues to be) a grant holder and research group head within the Telkom/Openserve/Aria Technologies Centre-of-Excellence (CoE) at the department of Computer Science since 2010. He heads up the Assistive Technologies research group (ATRG) within the CoE. The group conducts research into applications of machine learning and image processing towards novel assistive technology systems within areas such as human emotion detection and recognition, facial expression detection and recognition, gesture tracking and recognition towards sign language recognition, novel human-computer interfaces, augmented reality interfaces, sentiment analysis for business intelligence, weather forecasting, among many others. Since 2010, Dr Ghaziasgar has supervised 9 MSc students to completion (6 with distinction) and co-supervised an additional 2 MSc students to completion. Furthermore, he has supervised 39 BSc Honours projects to completion. In total, he has initiated and supervised more than 45 assistive technology research projects to completion since 2010, many of which have resulted in fully functional proofs-of-concept. Two of these prototypes have won 1st place awards at the “Imagine Cup” Microsoft technology competition. Dr Ghaziasgar has authored or co-authored more than 20 publications that include peer-reviewed conference papers and one book chapter. Dr Ghaziasgar also serves as an expert reviewer for the Journal of Advanced Computational Intelligence and Intelligent Informatics and a number of South African Computer Science conferences. Finally, during his student days, Dr Ghaziasgar received a number of prestigious academic awards, two of which are: receiving the highest award for exceptional academic excellence by the Rector of UWC in 2011 and placing 1st in the UWC Science Faculty in 2007.